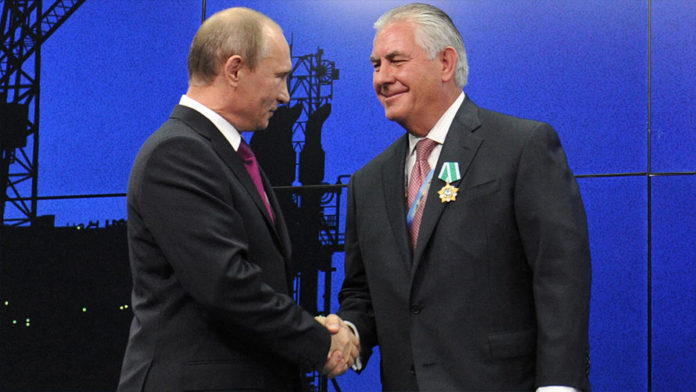 Exxon Mobil Corporation (NYSE:XOM), is a multinational oil and gas corporation based in Irving, Texas. Exxon has asked White House to waive the sanction on Russia and allow it to resume its business with Russian oil giant, Rosneft.

The Controversial Position of Trump Administration

The action by Exxon (NYSE:XOM) raised more than a few eyebrows since Trump’s presidential bid was tainted with intrigues over Russian interference. The fact that Russian intelligence may have had something to do with his winning in the election was the main issue. It is also said that Rosneft may have had a role in the US 2016 presidential election.

Rex Tillerson, who is the current Secretary of State, is also the former CEO of Exxon. As Exxon CEO during the time of Obama, he lobbied with government officials to lift the sanctions that constrained the company’s business with Rosneft.

During Tillerson’s time as Exxon CEO, he paid groups to lobby about the sanctions in Russia. He even met with Obama government officials 12 times to discuss and request to lift the prohibition. This sanction is estimated to have cost the company close to $1 billion.

The Consequences for Exxon If The Russian Sanctions Remain

The sanctions against Rosneft began 3 years ago in 2014. It prevents American companies from transacting or negotiating business with Russian based Rosneft.

Exxon (NYSE:XOM) wants the sanction lifted because it would like to continue the exploration of the Russian Black Sea. There are questions why Exxon would like to keep drilling in Russia’s deepwater, given the current cheap global price of oil.

The project would need a higher price per barrel to be profitable. Price per barrel would need to be around $70 as compared to the current price just below $50. If the project does not push through, the contract they have with Rosneft will become void.

How Will General Motors NYSE:GM Perform After its Closure in Venezuela

How to Buy Your First Stock