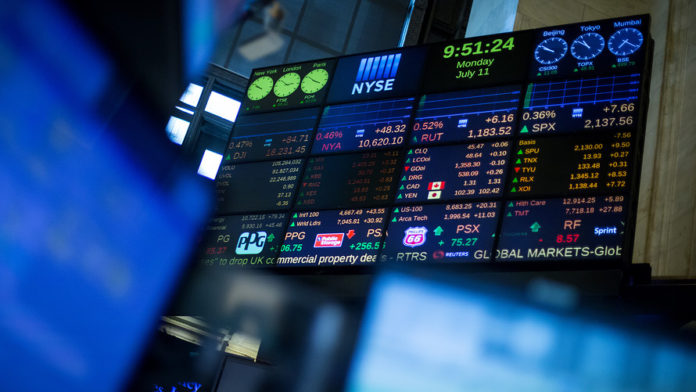 In the morning trading session on Wall Street Wednesday, the Dow Jones Industrial Average dropped nearly 20 points, while the Nasdaq composite index was up thanks to better than expected earnings report from member company Oracle, report MarketWatch and other financial news sources.
Oil futures prices were up on Wednesday, and investors were anxiously awaiting the Federal Reserve’s report on interest rates and inflation which will be released Thursday. The rising oil prices lifted energy stocks’ shares’ prices, but also made investors cautious about the cost of doing business for companies and consumer confidence.

Investors have not been prone to taking risks in recent trading sessions with the collapse of two giant sub-prime mortgage hedge funds run by financial trading giant Bear Stearns, Inc. The mixed market shows the caution that investors are exercising now, after the first half of the year saw record-high closings for the Dow and the S&P; 500 and a record-setting pace of mergers and acquisitions, which drove investors to plow more and more money into the market.

“The market remains in a very nervous state. Bailing out hedge funds is not good news for the market, so the pullback is still intact and its run has to continue for now,” Peter Cardillo, chief U.S. market economist at Avalon Partners.

“Durable goods were down more than expected and there’s still a lot of anxiety about the subprime losses. Nobody really knows what losses are on the books. Many people don’t want to stick around to find out what they are,” Brian Gendreau, investment strategist at ING Investment Management, told Reuters.

Investors have also been cautious because of soaring bond yields over the past couple of weeks, which is why they are so anxiously awaiting the central bank’s report. For the time being, most people expect the Fed to take no action to change the current federal funds overnight lending rate of 5.25%, the rate which affects all interest rates in the nation. But the Fed has made it clear that inflation does remain a concern. In addition, the housing market bust seems to be dragging on the economy more than the Fed expected.

“We’d like to hear a Fed that’s much closer to the center, because they’re still pretty hawkish. They sound closer to tightening than to easing. Hikes tend to slow down business and can dampen corporate profits,” Arthur Hogan, chief market analyst at Jefferies amp; Co, told the Associated Press.